It is December 5th 2013. I sit here in the corner of my dining room at the computer, wondering how I can describe our latest holiday. The task is made a little easier, since now the weather has turned colder. Much colder. It was just a week ago we celebrated our Thanksgiving. I was at the end of my very bad cold, having been sick for a couple of weeks. I was comforted knowing that everyone else who had been sick with this cold, said it lasted about 2 weeks. The first week was the hardest. I lost many hours of sleep, headache, constant dripping nose and coughing. Well, that’s enough about me.

The weather up until now had been very mild. Unseasonably warm, some would say. It was so nice, I found it hard to get into the holiday spirit. We were blessed with lots of sunshine and kids still enjoyed playing outside. I would let Buffy out to roam free in her little yard and I had trouble getting her to come back inside. I don’t have that problem now. I open the door and she runs out and back as if it’s a race. If she does pee really fast and come right back, maybe she will be worthy of 2 treats. I will not reward Winter habits.  Now if I could just convince her to go out in the rain.

While I am writing, I am listening to Younha’s “Subsonic” that a fellow blogger has provided along with her review. I will admit, there is something about her voice that makes me happy. It’s a good background to the story I am trying to write about Thanksgiving. That’s right, I almost forgot the theme of this post. I promised a complete coverage of the event to another fellow blogger who took the time to describe the Korean thanksgiving (Chuseok) which you can read here. It is a wonderful visual and descriptive post, and I promised to return the favor by detailing my American Thanksgiving.

Thanksgiving is an interesting holiday. If an outsider was watching my family celebrate this day, they might see it as a day where women prepare lots of food over several hours (maybe even days) and then everyone eats as if it’s a race. Then the men (and some women) go to the den to watch football and the women clean up. It’s a typical rendition of events I have watched take place since I was little. It’s comforting watching everyone come together. Only as I get older, I have gone from child to young adult. Then married and watching my generation have the kids and see them take our place running around outside, pausing long enough to pray with the family and gather around the kids table to enjoy only the foods they would tolerate. Nothing green if they can help it. Always rewarded with pumpkin pie (even if It wasn’t earned) because holidays are for enjoying yourself, right?

Now those young kids have grown up and have children of their own. Watching them run around outside, ride their bikes and chase each other till their cheeks are red from the cold wind, makes me sad. Makes me feel old. We still gather around in a circle to pray and offer thanks for great food, the people who prepared it and remembering those who are not with us because they are celebrating somewhere else. We also remember those who are simply no longer with us. This is the first Thanksgiving without my mother who passed away just after Christmas last year. She was 87 and she loved cooking, and she did so most of those 87 years.

So this year, thankfully I had a couple extra days to feel better before joining the family on Saturday (after the traditional Thursday which was actually Thanksgiving.) This gave everyone a chance to celebrate with their own family or other in-laws. It’s a win-win for everyone. My oldest sister prepared most of it as usual. I brought dessert (again feeling bad so I didn’t bake my usual pumpkin pies) I bought a pumpkin cheesecake from Costco. It was good. There were several other pies so everyone could have their favorite.

The main course was the turkey and homemade gravy. She serves it in a giant crock pot, so you can just ladle it over the mashed potatoes (Ana’s perfectly spicy jalapeno mashed potatoes) and the stuffing. It’s called stuffing because people used to actually stuff it inside the bird and cook it. But there can be some contamination issues from cooking it inside a raw turkey so we don’t. I will just cut to the chase and say we cook it outside the bird. It’s a wonderful mixture of vegetables, seasoning and bread crumbs, mixed together and baked, it’s yummy. We were also lucky enough to have ham as well. Some houses are either “turkey or ham” but my sister wanted to make everyone happy. A wonderful green bean casserole which is a “Campbell’s soup creation” and a holiday staple at our house. Yams baked with marshmallows, fruit and bread.

I took a few pictures, although there were 26 of us, we were scattered throughout the house. Of course it’s a great day for football so there is always a group watching a game. Because this is my blog and not everyone in my family wants to be floating around the cyber-world I have blurred some edges to protect the innocent. I hope you don’t mind my break from all that is KPOP, so I could share my American Thanksgiving with you. 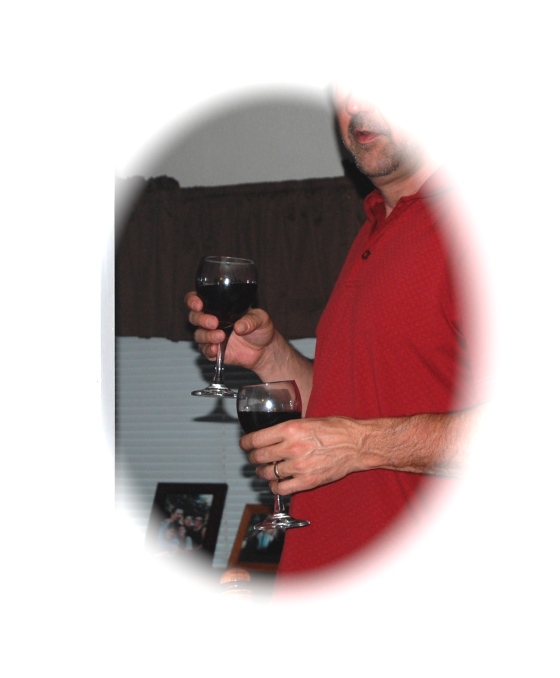 It’s not always necessary to have two glasses of wine at the same time, but I say live a little, it’s a Holiday. I hope you have enjoyed a great holiday yourself. Thanks for taking a peek into my world, as small as it is. It really is a time for being with family and being thankful and I am lucky enough to have the best of all of that and more.

Posted by Chris (mydogknowsKorean) on December 6, 2013 in Here's what I want to share.... and tagged family, Thanksgiving, Younha.

Native Californian, married to a wonderful & very understanding hubby. We have a dog named "Buffy." She watches k-dramas with me. I LOVE CN BLUE! My interests have expanded to other artists like...Jang Keun Suk, Super Junior, YBand, Park Shin Hye, Lee Min Ho to name a few. I started a couple other blogs, because Korean Pop Music isn't everything. I love to sew and give back, and take care of my Family. I work a full time job with wonderful people! I also thought it was time to share some words of wisdom from my years of living and loving a man who happens to be a paraplegic. We have been through lots over the years, so time to share. Be happy & you can make the world a happier place!
View all posts by Chris (mydogknowsKorean) »

The slightly challenging life of an almost perfect couple.

Made by two Franco-Shizuokans born in Bourgogne and driven by the love of their Prefecture.

To live will be an awfully big adventure.

So I moved to England for a year. I want to travel the world. Let's see how it goes!

Let's talk about anything...

TVXQ got that Something ~

My Drama Tea
If I had a minute to spare...

In which there is rambling about Korean dramas, opinionated sounding off, and sharpening of knives.

used to be a Sewing Blog - Now KDrama