It’s Been a while. Sorry.

I have been out of the KPOP loop for a while.  Many life issues came up and sadly something had to give. My husband was ill for a while and actually watching Dramas and listening to KPOP helped pass the many hours at the hospital. I changed jobs and at my age, I needed to give that about 110% and again…my listening habits and ESPECIALLY blogging habits came to a standstill.

I have recently found myself talking about KPOP, past concerts and my love for the culture altogether with my dear friend and fellow KPOPper Wendy. The reason that brought us back, was quite sad to say the least. Anyone reading this will know I am talking about the recent loss of a major source of happiness, smile and dancing in my head fun. When I saw the tragic death of SHINee member Jong-Hyun pop up on my FB news feed, I instantly thought of Wendy and her daughter. The hours we spent listening to their music, watching videos and LIVE concert recordings. I wanted to call her, but I didn’t want to tell her. I waited. By the time I came home from work, she had messaged me.

I think I may have purposely put a little distance between KPOP and me when I learned more and more about the groups, how young they were, how they suffer by working VERY LONG hours after signing LENGTHY contracts. They leave their families and live in dorms. As a person old enough to be a mother to some of these young stars, I concerned myself with their wellbeing and that overtook my enjoyment.

I still listen once in a while. I do still enjoy having that part of my life and memory of those fun times with my friends. The travel and crazy concert trips. The Lines, sleeping in the airport, driving hours and hours with little sleep. IT WAS AMAZING.

I’m not saying I am back, but I do feel the need to make a post in respect to Jong-Hyun. He gave everything and in the end, it was too much. I beautiful light extinguished too early. My best to his family and his SHINee family.

A portrait of Kim Jong-Hyun on a mourning altar at a hospital in Seoul on December 19, 2017.  (no copyright infringement intended for a photo I found on multiple sites)

It has been a while since I have watched anything Korean.  Yesterday, I found a movie on DVD and bought it. “Train To Busan” …I liked the cover, the blurb on the back and GONG YOO. I will watch anything he’s in.

Today, I made a coffee, I cozied up on the couch with a blanket and my trusty dog BUFFY, and pushed play. She immediately fell asleep. The movie seemed to have a decent story, I am down for anything with “zombies” and the special effects were very good. Proves Hollywood does not retain the only movie making skills in the world. I love foreign films, and its usually a nice change to the cookie cutter money makers produced in the US. Every once in a while we make some great motion pictures, don’t get me wrong. I do appreciate another cultural point of view. Lets face it, Koreans do drama and horror VERY WELL. 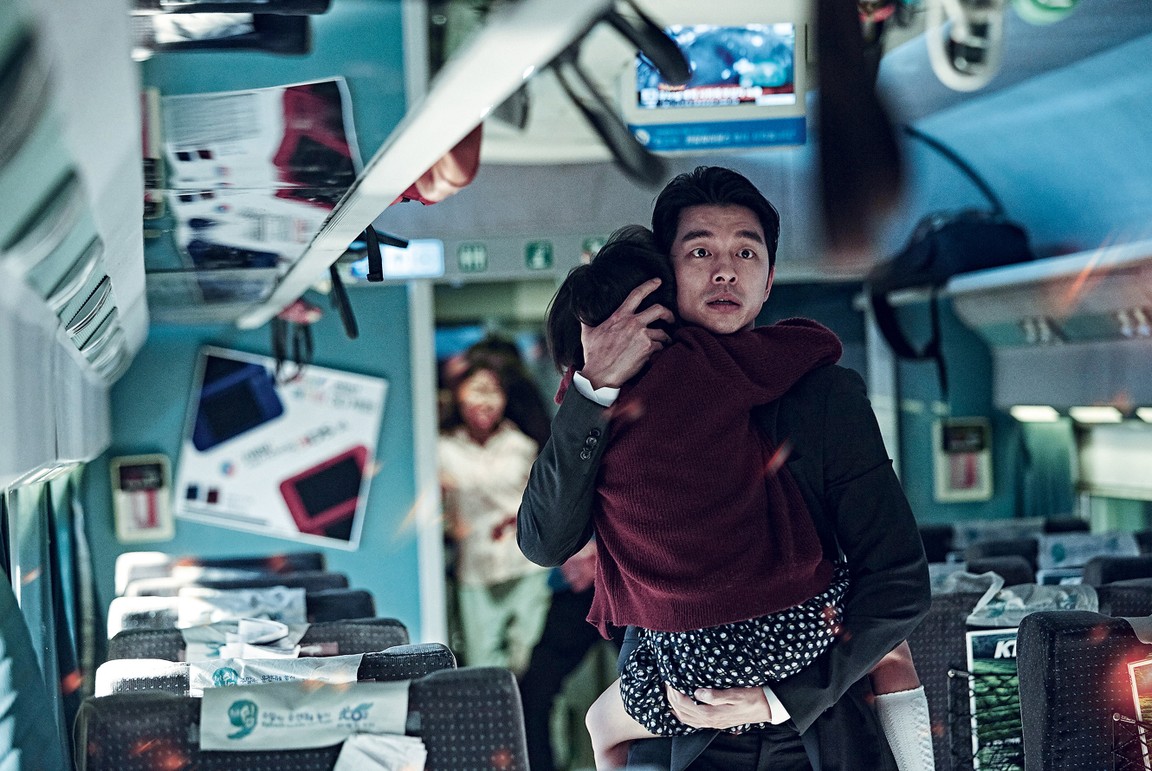 I should say, I am not a “horror” genre fan per say, but I have recently seen a lot of Zombie-type TV SHOWS and MOVIES. All the usual suspects of course and so I can watch without to much screaming or eye covering. The filming of this movie takes place on a train. Kudos for doing all that work in close quarters. It was believable, scary and pretty intense.

This movie lacked only a little in the story, since we never get a good idea of how this “plague” starts, which didn’t bother me too much. But the way they tried to tie in that bit of the plot fell very short and kind of lame. I would have preferred drawing my own conclusions. That was my only issue, I give this movie a nice round of applause. I loved the characters, I rooted for most and was sad at the loss of others. I did get a little happy when some fell, but I don’t want to give too much away.

I would have preferred Seok Woo not die in the END. But that being said, I was not surprised and at some point as the main actors started dying off, I had a feeling. Plus it was very Korean to not have a completely happy ending.

After watching the movie, I then checked out some reviews. I have learned when it comes to MOVIES, I like to draw my own conclusions. I do enjoy reading others thoughts after I view, just to see whose open minded and who is not.  Like here on this ROTTENTOMATOES site.

I do like the trailers, photos and FILM CREDITS found at IMDB.

All in all, very happy I purchased this movie, it will be a great occasional watch when I feel like subtitles and zombies….and a little GONG YOO and his smile. I can’t wait to finish watching “The Goblin” on Dramafever.com, so I can add another review.

Posted by Chris (mydogknowsKorean) on February 26, 2017 in Here's what I want to share...., Other stuff....Like Korean Dramas and tagged Gong Yoo, Korean Movie.

*We would love and appreciated if any of our reader/visitor help us to translate the article above. -CNBOICE Team- Photo courtesy Vogue Korea Posted by Tara Lee

It’s a good thing today’s Friday because I just tried to date this post as April 16-22, 1996. Clearly it’s been a long week. There’s really no better way to wrap up a week from Hades than with a playlist of incredible music which is why I’m happy to share with you this week’s KPOS.…

Review: Descendants of the Sun

Even though Descendants of the Sun is not very well-written and far from subtle, there are things to enjoy in this show, if you’re willing to close your eyes to its shortcomings. Things like appealing lead characters (most of them, anyway), character relationships, the romance and the bromance. And not forgetting Song Joong Ki in his most schmexy drama outing to date (ahem).

Flawed, but not without its charms.

Boy group CNBLUE will be releasing their 10th Japanese Single Puzzle on May 11. CNBLUE’s newest album Puzzle marks the 5th anniversary since the group’s debut in Japan. According to the group’s agency, FNC Entertainment, title track Puzzle is a wedding song about a never-ending love. The upbeat and refreshing love story was composed and […]

THE SHORT VERDICT: A fairly typical contract-marriage-meets-terminal-illness sort of melodrama that doesn’t pack many narrative surprises. The surprises mostly come in the form of the fantastic deliveries by the main cast. Namely, UEE is flat-out fantastic in this. So is Lee Seo Jin, and so is little munchkin Shin Rin Ah. The chemistry between these three, […]

This weekend’s drama to marathon is a really good one. I was so into it while it was airing, the wait between new episodes was brutal! Lucky for you, the show has finished airing so you can w…

It’s been a while and some have missed you

the ground lies dry and wanting.

The deep growl you make lasts longer than I like, as the sound rolls by

and the light flashes so quick I’m blinded.

The grey mounds blend softly into the deep purple, the edges are almost black.

I watch as the sky fills with your darkness, a growl rolls by again,

Will the rain be soft or menacing, will it sprinkle or flood the valley,

These questions we cannot answer.

Only the dark sky can know how full she is and what wrath she will throw down,

I can only sit back, watch the sky grow darker and listen to the odd drum on the ground.

Posted by Chris (mydogknowsKorean) on January 18, 2016 in A little bit of poetry, Here's what I want to share.... and tagged original poem.

The slightly challenging life of an almost perfect couple.

Made by two Franco-Shizuokans born in Bourgogne and driven by the love of their Prefecture.

To live will be an awfully big adventure.

So I moved to England for a year. I want to travel the world. Let's see how it goes!

Let's talk about anything...

TVXQ got that Something ~

My Drama Tea
If I had a minute to spare...

In which there is rambling about Korean dramas, opinionated sounding off, and sharpening of knives.

used to be a Sewing Blog - Now KDrama